Why Your Sump Pump Runs Every 30 Seconds: Causes & Fixes

Why Are Plumbers So Expensive? [You’ll Be Surprised]

Non-Flushable Items: Things You Should Never Flush Down The Toilet

How To Start A Plumbing Business

A sump pump protects your home from the flooding that so often accompanies heavy rain. When rainwater soaks into the ground and begins permeating your basement, it can do severe damage. Sump systems help to prevent basement floods by collecting groundwater and channeling it to a pit in the lowest part of a basement. 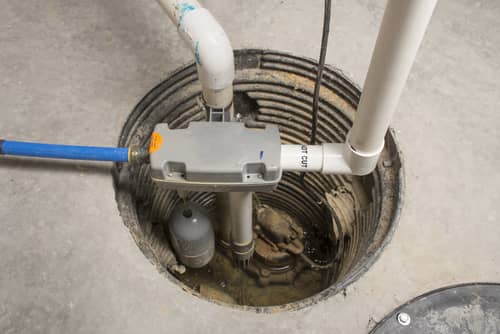 The sump pump removes water from the pit and directs it safely away from the structure, usually to a storm sewer or detention pond. Unfortunately, though, sump pumps can malfunction or wear out. If your sump pump seems to be running every 30 seconds, here are four scenarios that might be causing that.

Sump Pump Is Below the Water Table

One of the most common culprits for this issue is the location of the natural water table. The water table is the level where water rests in the ground around your home. When it rains, this water table naturally rises. Sometimes, the water table rises higher than the floor of your basement. Water then seeps inside between the foundation wall and the basement slab.

Your home may have a built-in drain tile system in its foundation. This perforated pipes system runs parallel to the “footer” at the bottom of the home’s foundation. It uses gravity to channel groundwater into a pit located in the basement floor – also known as the sump. When the water level in the sump pit rises, a float switch activates the sump pump. The pump then removes the water from the pit through a pipe that channels the water away from the home.

If your sump pump sits below the water table, you can raise it a bit so that water will need to reach a higher level before the pump starts working. One common method is to place a round steppingstone or two at the bottom of the pit so that the pump sits slightly higher in the pit. While this solution doesn’t always work, it’s worth trying before delving into more complicated options.

The usual cause is the power cord has become tangled in the float switch’s path, preventing it from operating normally. More often, the cord blocks the float switch from ever turning on at all, effectively sidelining your sump pump and allowing your basement to flood. Check the power cord by tracing its path. Make sure it isn’t floating around in the sump pit.

If necessary, use zip ties to take up slack and secure it to the sump pump’s vertical drainpipe. This will prevent the cord from drifting into the float switch’s path.

Replacing a float switch isn’t usually worth the trouble. If the float switch has worn out from overuse, the sump pump itself is probably nearing the end of its life expectancy too. This means it isn’t cost-effective to replace the switch.

Few plumbers bother with such a repair, choosing instead to replace the entire sump pump. If your sump pump runs frequently, plan on replacing it every five years. If your sump pump rarely turns itself on, you can expect it to serve reliably for eight to ten years.

After that, your pump is on borrowed time. It’s also a good idea to install a battery or water-powered backup sump pump that will prevent flooding in the event of a power failure or if your primary pump stops working.

The Weather Is Cold

During the winter months, the sump pump drainage lines can freeze and form a blockage in the pipe. This causes a sump pump to run frequently in a futile attempt to remove rising water from the sump pit before it encounters the ice blockage in the drain pipe.

To address this issue, add a heat source. A hairdryer directed straight at the drainage pipe will work best. When the drainage line is frozen farther down the line, however, you’ll need to take a different approach.

Go to a hardware store or home center and purchase a thermostat-controlled heat cable (sometimes called heat tape). Follow the directions on the package to apply the cable to the outdoor portion of the sump pump’s drainpipe. Plug the cable into a GFCI protected electrical outlet. The heating cable will quickly thaw the pipe and prevent it from refreezing. Be sure to use an extension cord that is approved for outdoor use.

Furthermore, keep plug connections elevated so they cannot come into contact with groundwater. It’s also a good idea to wrap the plug connection with waterproof electrical tape to keep it dry if it’s exposed to rain or snow.

Heat cables are not meant to be used year-round, and if misused, they can present a fire risk. For that reason, be sure to remove the pipe’s heating cable as soon as the freezing conditions have passed.

Water problems abound when there’s negative drainage around your foundation. This means the slope of your yard tilts toward the house. Ideally, you want to direct the water away from your home, and the grade of your yard plays a significant role.

Sump pumps work hard to remove water from around your foundation, but when there’s negative drainage causing water to slide toward your foundation and pool there, the water removal job may become overwhelming for your sump pump. Under these conditions, your sump pump may run as frequently as every 30 seconds, if not constantly.

Unlike other sump pump fixes, the solution to negative drainage can be both time consuming and expensive. The quickest way to address the problem is to bring in topsoil and fill low areas around the foundation, then slope the dirt so that rainwater will flow away from the foundation out into the yard.

Depending on your negative drainage severity, this can be a quick fix solved by one person, a shovel, and a wheelbarrow full of dirt. However, in more severe cases, it may require a truckload of topsoil, earthmoving equipment, and an entire crew of people to change the grade of your yard.

A landscaping contractor can help address soil grading issues. It’s also a good idea to attach downspout extensions to your roof gutter downspouts. This will direct water farther away from the foundation during a storm.

Ken Jenkins is a Master Plumber at Roto-Rooter Indianapolis. Passionate about all things plumbing, Ken is eager to share his knowledge of pipes and plumbing systems with the world. Ken and his fellow Roto-Rooter plumbers are available 24/7 to resolve any plumbing or drain issues. Schedule a consulting and service appointment at (317) 462-6811.